Welcome to our page where you can access information about Sabinea Carinalis or Bwa Kwaib, a National Symbol of the Commonwelath of Dominica country. 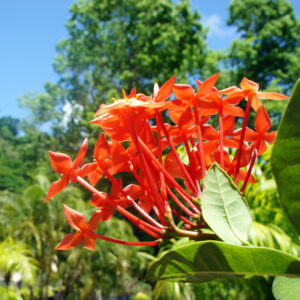 The flower honoured as our National Flower is a wild xerophitic plant known botanically as Sabinea carinalis, commonly known as Carib Wood or ‘Bwa Kwaib’. It was legislated as the National Flower, along with the Coat of Arms and National Flag in 1978. (The National Emblems of Dominica Act, 1978) (Act No. 18 of 1978).

As an indigenous plant, one of the reasons for which it was selected, it has survived our entire history, and hopefully, will be with us for all time. It can therefore be said to represent the continuity of our young people.

When in bloom, it displays precocious bright scarlet flowers along the entire length of its branches, and is found growing along dry coastal areas. Distribution in the wild is low, but it is an extremely hardy plant. When grown at high elevations, even in good soil, ‘Bwa Kwaib’ will be bushy but not flower profusely. Around April, when in full bloom, the plant presents a magnificent spectacle.

Its hardiness and scarlet flowers are reminiscent of our strong rugged and resourceful people with an ability to survive and overcome problems, and Dominica’s ability to triumph despite seemingly insurmountable obstacles.