Welcome to our page about the National bird of Dominica: Amazona imperalis (Sisserou Parrot). 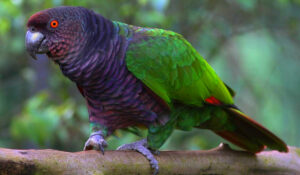 The Sisserou parrot (Amazona imperalis), “The Pride of Dominica”, is generally recognized as the National Bird of Dominica. The parrot figures prominently on the Coat of Arms, the National Flag, The Public Seal, The Mace of the House of Assembly and Dominica’s Honours for Meritorious Service to the Country.

The Sisserou Parrot is protected and it is probably among the oldest species of Amazon parrot in the world, and is found only in Dominica. Unfortunately, this bird is most vulnerable, particularly when young, but through evolution, it has adapted to various changes in its habitat. Even more unfortunately, it has not been able to adapt to the bad influences of man.