Welcome to the about page for the Commonwealth of Dominica island country. Find everything you need to know about this amazing island nation in the Caribbean.

Where is Dominica Located?

Sitting halfway along the Eastern Caribbean archipelago, Dominica island country is located just a few miles from Martinique to the south and Guadeloupe to the north. Stretching 751 km² (290 square miles), the island boasts 148 km (91 miles) of coastal line. Dominica’s official name is the Commonwealth of Dominica, which is mostly referenced in official communications and to distinguish the island from the Dominican Republic, its northerly Caribbean sister.

Dominica’s first inhabitants, the Ortoroids, arrived from South America around 3100 B.C. and lasted on the island until around 400 B.C. Next came the Arawaks, who settled in about 400 A.D. By 1400, the Kalinago or “Caribs” moved aggressively up the Caribbean from South America, eliminating the Arawak from the region, including Dominica.

Migrating in waves from South America as early as 3,000 B.C., various tribes made Dominica their home, and by 1,000 A.D., were well settled, calling the island “Waitukubuli,” meaning ‘tall is her body’ in the Kalinago language.

Dominica was spotted on 3rd November 1493 by Columbus on his second voyage to the new world. He found the island inhabited by Carib Indians, who in the 14th century had either expelled or exterminated the indigenous Arawak Indians. Ignoring the Kalinago name of “Waitukubuli,” Columbus renamed Dominica’s island as he first made landfall on a Sunday.

The Caribs successfully resisted Spanish colonization efforts, but the British and French followed from the 1600s on, battling each other and the Caribs to claim the Island. On November 3rd, 1978, the island was finally granted its independence from Britain.

Dominica is the only Caribbean island to retain a colony of its pre-Columbian population. Today, over 2,000 Carib Indians, properly known as the Kalinago, inhabit a 3,700-acre territory on the island’s northwestern side.

What is the Capital of Dominica? (Roseau Dominica)

The Capital of Dominica is named Roseau. It locates on the southwestern coast of the island at the mouth of the synonymous “River Roseau”, facing the spectacular sea of the Caribbean. Its architecture style combines modern, along with French colonial elements. You will find mesmerizing waterfalls, soothing plus therapeutical thermal springs, and cobbled paths.

What language is spoken in Dominica? The national and official language of Dominica is English; however, French and a local French Creole dialect are widely spoken. Roseau is the Capital city of Dominica and Portsmouth, the second largest town. Other principal urban centers are Grand Bay and Marigot. The most dominant religion is Roman Catholicism.

What is Dominica Island Known for?

Land and Climate: The Commonwealth of Dominica is known as the ‘Nature Island of the Caribbean’ due to its wide variety of flora and fauna and extensive natural park system, boasting a remarkably unspoiled natural beauty. Dominica is home to the world’s second-largest thermally active lake and boasts hot and cold sulfur springs with healing properties. Dominica is home to the Caribbean’s highest peaks, namely Morne Diablotins, which stands at 1,447m high. There are many waterfalls and lakes and 365 rivers. Dominica is also a largely popular location for hiking, scuba diving, and whale watching.

The climate is tropical and the terrain rugged and much of the island is covered in rainforest. Average daytime temperatures generally vary from 26°C in January to 32°C in June but temperatures dipping to 13°C on the highest peaks are not uncommon. 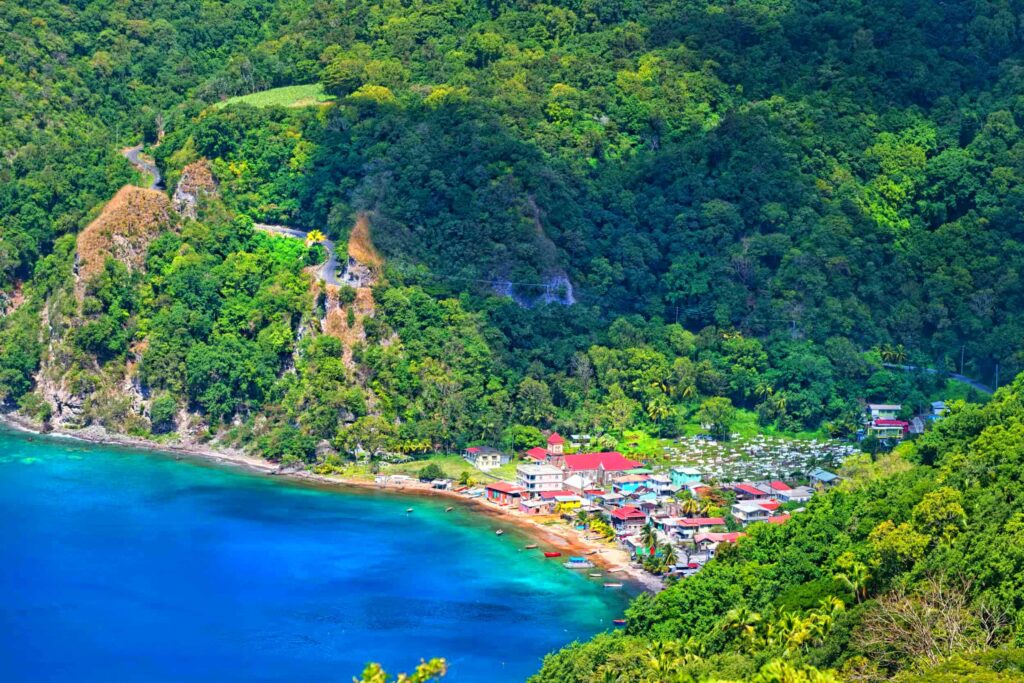 Douglas-Charles Airport is the larger of the two and most visitors to Dominica will arrive through this airport which accommodates commercial airlines. Canefield Airport, located 15 minutes from the capital city of Roseau, is only 3,100 ft long and is suitable for chartered flights and private jets. Douglas-Charles Airport which is located in the north-eastern side of the island is approximately one hour from the capital city, Roseau.

International flights from the US and Europe are connected to the island through hubs in Antigua (ANU), Barbados (BGI), St. Maarten (SXM), Puerto Rico (SJU), Guadeloupe (PTP), and Martinique (FDF).

The currency used in Dominica is the Eastern Caribbean Dollar, a common currency issued by The Eastern Caribbean Central Bank (ECCB) to all eight members of the ECCU, which has been pegged to the US Dollar at the rate of USD1= XCD 2.7169 since 1977, providing certainty and stability in exchange transactions.

What is the Population of Dominica in 2020?

As of Sunday, November 29, 2020, the current population of Dominica is 72,060 (based on the latest United Nations estimates) with an average of 20,000 of those inhabiting the capital city Roseau and Portsmouth.

Dominica population is equivalent to 0.00092% of the total world population. With a vibrant entwinement of European and African cultures, Dominica is home to the Caribbean’s only remaining population of pre-Columbian Carib Indians.

What are People from Dominica Called?

Everyone who lives in Dominica calls themselves Dominican. And so do people from the Dominican Republic when speaking English.

Is Dominica the Same as the Dominican Republic?

On the contrary, Dominica lies in the Windward Islands, halfway between Puerto Rico and Trinidad and Tobago.

Dominica is a Democratic State, which gained full Independence on November 3, 1978. Dominica has a unicameral House of Assembly with 30 members, of which 21 are elected representatives, and 9 appointed senators (5 by ruling party). Elections are held every five years with universal suffrage of adults being 18 years. The House of Assembly elects the President who can serve for not more than two terms of five years each. The President appoints the Prime Minister, who consults the President in appointing other Ministers of Government.

Dominica is a member of the Caribbean Community (CARICOM) and the Commonwealth of Nations. CARICOM is an international organization that consists of 15 member states all of whom are based in the Caribbean. CARICOM works to promote economic co-operation and integration in the region. The secretariat headquarters is based in Georgetown, Guyana.

The Commonwealth of Nations is a voluntary organization of 53 countries that share no legal commitment to each other but have a common goal of enhancing the “development of free and democratic societies” and “promoting peace and prosperity to improve the lives of all peoples of the Commonwealth.” There are many benefits to Commonwealth members such as easier travel between Member Countries, protection of all Members by other embassies and commissions around the world, and eligibility for certain sporting activities (the Commonwealth Games).

The Nature Isle of the Caribbean Videos

Dominica country is known as “The Isle Nature of the Caribbean”. Access a collection of YouTube videos of Dominica and experience the natural beauty of this island country.

Contact us on consulate@dominicaconsulate.com for your inquiries about the Commonwealth of Dominica island country

The Commonwealth of Dominica Island Consulate in Athens, Greece

Visit our blog to stay updated with the Commonwealth of Dominica news.